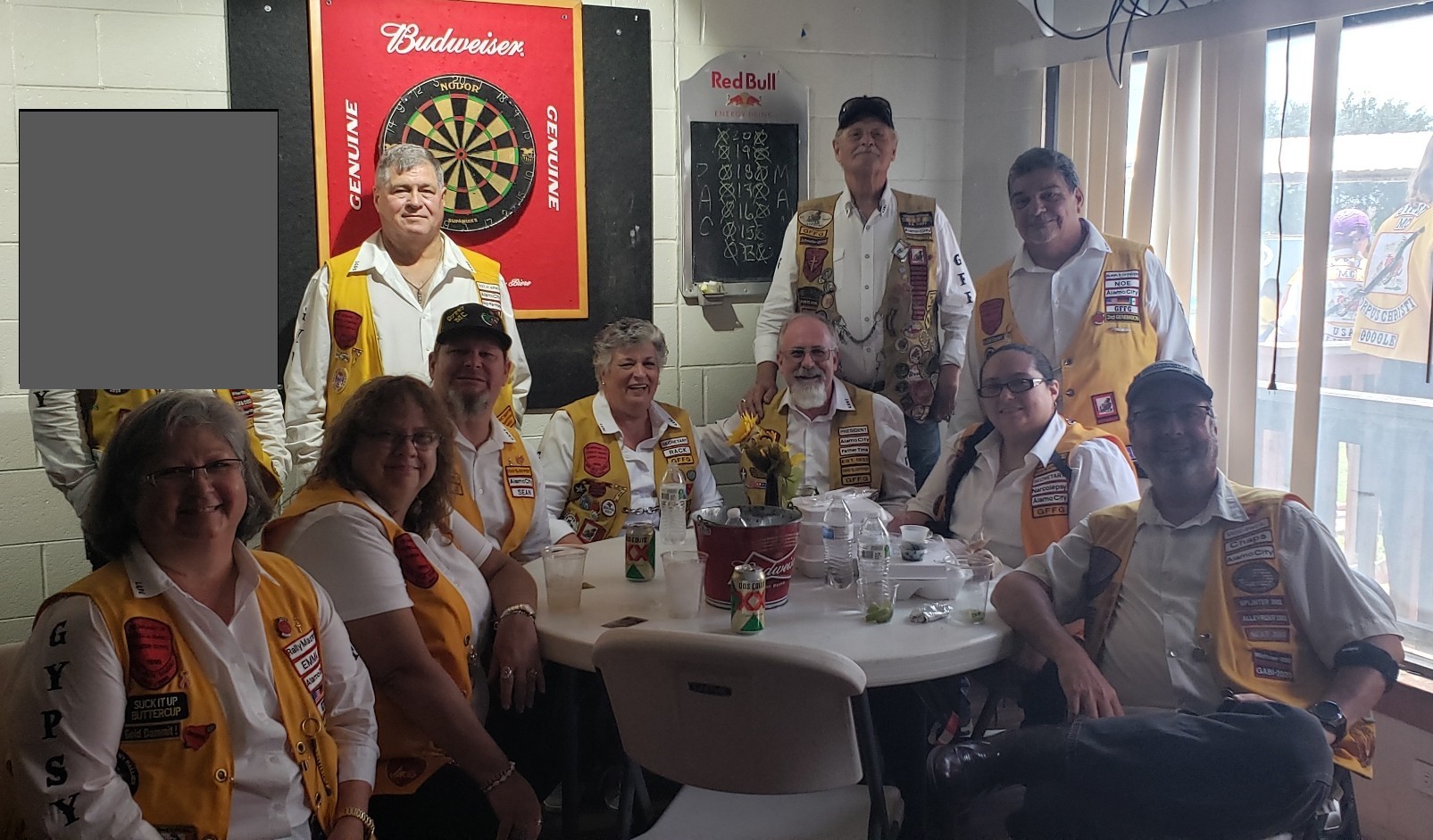 In 1932, in a small town in Eastern Tennessee named Maryville, the GYPSY MOTORCYCLE CLUB was born. At this time several adventurous souls were beginning to venture out on the public roads on their two-wheeled machines. One of these brave souls was a young man named Lee Simerly "Happy Jack", Papa Jack's father. Happy Jack would get several of his friends and acquaintances together and do some serious riding through the mountains and towns of Tennessee. As this group of daring young men grew they took on the name of the "Gypsies" and formed a club with Happy Jack being its first President. Thus, the GYPSY MOTORCYCLE CLUB was born.

As the group grew larger and rode a greater number of miles the people from the towns around began to refer to them as the "Sour Pickles Of Society", not understanding these daring and fun loving group of bikers. When Papa Jack first saw the character pickle riding a motorcycle, he knew the pickle patch had been born and to this day is proudly worn on the back of all Gypsies.

Then in 1948, some 16 years later, Happy Jack's brother Chuck took over as President and remained so until Papa Jack became President in 1960. Jack Simerly, now known as Papa Jack, moved to Aransas Pass, Texas where the club became known as an outlaw group. Because of this notoriety the club was disbanded in 1964.

In 1966 Papa Jack and brother Jim "Hap" Simerly decided to reorganize the Gypsy Motorcycle Club with the main aim in mind to build a better image of bikers in the public eye. It began by first chartering the club with the American Motorcycle Association in 1968 and changing the once worn levi cutoff jacket worn by that daring group of young men, to the Riverboat Gamblers Vest that is still worn today. Estella Simerly, Papa Jack and Hap's Mother, was heard to say that this vest would influence the Gypsy members to be as "good as gold".

The Aransas Pass Chapter, now known as the Corpus Christi Chapter and still referred to this day as our "Mother Chapter" was chartered with AMA in 1968 and carried Charter #4 upon joining Texas Motorcycle RoadRiders Association (TMRA) in 1972. However, to safeguard that charter # from ever being lost, International now holds it.

In 1973, some 41 years later, the Gypsy Motorcycle Club became National and International by forming chapters in not only Texas, but Oklahoma, Mexico, Tennessee and the first chapter in Germany in 1983. Since then we have crossed the state lines with chapters also in New Mexico and Louisiana.

Up until this time the Gypsies had known only one leader, Papa Jack,but the club was growing so large now and covered so much territory that Papa Jack found it necessary to have his own personnel officers. This group of officers became the International Chapter and were designated to wear "Black Rockers". At a meeting in the early 1980's on the beach, Papa Jack changed the black rockers to red rockers in an effort to more easily distinguish his International Chapter. The Red Rockers made up Papa Jack's chapter and answered only to him, and this still holds true today with the Chairman of the Board/International President. Their positions are appointed and not elected offices.

In 1979 Papa Jack married Jaynie Phillips and in 1980 Papa Jack was spending more and more time on the road as a truck driver and felt the needs of the Gypsies could be better served if there was someone around more often. So at a Red Rocker meeting at the clubhouse in Corpus Christi, he appointed Jim "Crazy Indian" Scarberry as President and Chuck "Gray Fox" Darnell as Vice President. It was an exciting time with Indian and Fox, as this was Papa Jacks first, but not last, attempt to transfer power and responsibility from his shoulders in an effort to pursue a life long dream. In 1984 Papa Jack and Jaynie moved to Oklahoma with farming and raising cattle as their long awaited dream. and once again as President, Papa Jack had the 1985 Mandatory in Oklahoma and this time appointed Jim "Pappy Jim" Davis as President and Bert" Erdin-Erdin" Lynch as Vice President of the Gypsy Organization, but Papa Jack remained Chairman of the Board with 51% of the vote.

The next few years proved to be turbulent to say the least under Pappy Jim's leadership. It became more and more apparent that Pappy Jim's vision for the club was not the vision that the membership had come to believe in through Papa Jacks direction. It became obvious that Pappy Jim's integrity was going toward his need to abuse his power as International President. In 1992 Pappy Jim had secretly incorporated the Gypsy Motorcycle Club as a non-profit organization. The majority of the Gypsies were not in favor of the incorporation including Papa Jack and Erdin-Erdin. Then in July of 1994 Papa Jack removed Pappy Jim as International President and appointed Erdin- Erdin as Chairman of the Board & International President, giving him his 51%. Erdin-Erdin then appointed Roger Ross as his Vice President. Pappy Jim was not giving up that easy and tried to ignore Papa Jack's decisions trying to rally support for his leadership and control of the club. Then in November of 1994 a very public court battle began between supporters of Erdin-Erdin and Pappy Jim. To resolve the matter of who would lead the Gypsies, the judge listened to testimony from a number of Gypsies and then called for a vote by the membership that was in attendance. In the final judgement in June of 1995 the court awarded the Club to Erdin-Erdin and Papa Jack with 229 votes in favor of Erdin-Erdin and 47 votes only for Pappy Jim.

Pappy Jim tried to ignore the court's final decision forcing Erdin-Erdin's attorney to obtain a temporary injunction that restricted Pappy Jim from representing himself as a Gypsy. Erdin-Erdin was to remain Chairman of the Board and International President to the Gypsies from 1994 to 2001. During that time Roger Ross was to retire and Erdin-Erdin appointed Lloyd "Burrr" Rowland as his next Vice President The Gypsies thrived under Erdin-Erdin's leadership and the organization became stronger than before and more loyal to the Gold. Known for his down-to-earth views on the importance of the motorcycle in the Gypsy culture and the fundamental reason for the existence of the Club, i.e., to ride and have fun, he attracted many new members. Erdin-Erdin was very active in his role as Chairman of the Board and International President, and supported, with his attendance, many of the Gypsy rallies and benefits that were held each year. Erdin believed that the Gypsy MC was meant to allow us all to enjoy the friendships of our brother and sisters whether by riding side by side or sitting around a campfire telling a few stories or jokes.

As we walked along the dirt road at a rally, Papa Jack stopped and pulled a worn out old wallet from his back pocket. Fumbling through the clouded plastic picture holder, he pulled out a faded black and white picture and handed it to me; it was of a young woman. "Quite attractive", I thought, with her standing next to a motorcycle, only like the ones I've seen in antique motorcycle magazines. I stared at the picture, then looked up and he said "The woman you see there is my Mother, I rode on the back of that motorcycle in her belly on the way to the hospital and I rode in her arms on the way home".

He truly was born a Gypsy.